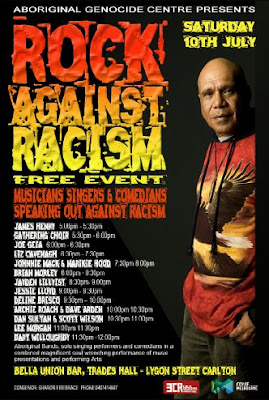 Whether people chose to believe it or not, we all have experienced or come across racism, either directly or indirectly. But the power of music can always change the way people interact. Last nights Rock Against Racism concert at the Trade Hall in Melbourne, proved that through music people can come together not only for a worthy cause but to show their support for something that in this day and age should be outdated.

Concert organiser Sharon Firebrace, Socialist Alliance Candidate for Senate & NAIDOC 2010 Convenor spoke passionately about how racism in this country is a big issue that needs to be addressed before the next State and Federal Elections. Ms Firebrace who spoke about the oppression of Aboriginal people in the Northern Territory, highlighted the previous and current government's lack of understanding of the rights of Australia's Aboriginal people and the government's continued exploitation.

Ms Firebrace said, "They've planted a thousand hands (Sea of Hands) on the steps of Parliament, they've had a massive campaign on Reconciliation, the former PM Kevin Rudd and the Labour Party made a massive Apology on one hand, and on the other hand, they forced the Northern Territory Intervention onto Aboriginal people, and has maintained it and threatened that it's going to go national. That's exploitation, and that's racism". Ms Firebrace said that was the reason she was inspired to host the Rock Against Racism concert.

Aboriginal musicians came together for the end of NAIDOC spectacular, that was worthy of missing the State and National NAIDOC Ball, which were also held in Melbourne. over the weekend. Around 300 people attended the concert, black andwhite supporters, and even an Afghani asylum seeker who was introduced to the crowd by controversial former ATSIC Chairman Geoff Clarke, who said "that everyone experiences racism, not just black people".

No matter who you are or where you come from, racism is an issue. Aboriginal Singer/Songwriter, Archie Roach who was heading the Rock Against Racism concert, talked about racism and about his respect for Rugby League player Timana Tahu, who recently put his hand up and refused to accept racism in sports, and subsequently caused a media sensation when he quit the NSW State Of Origin Team, in protest against racist comments from the then coach, Andrew Johns.

Roach said, "I saw him last night, at the (NAIDOC) Ball and he got a standing ovation, for his stand against racism. And its good, because, you know, injustice and racism and all those rotten things, will continue to persist, if good men remain silent".


The performances on the night symbolised the struggles between black and white Australia and also the passion of healing the racism in this country, through song and coming together. Other performers included, Dan Sultan & Scott Wilson, Liz Cavanagh, James Henry, Gathering Choir, Brian Morley, Jessie Lloyd, Deline Briscoe, Lee Morgan, and Bart Willoughby.
Posted by ATSI GRAPEVINE at 1:35 AM