RAY MARTIN - Education for Aboriginal Kids is the Key 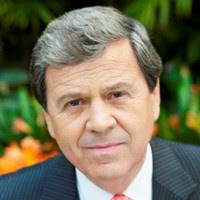 His name is synonymous with the friendly, smiling face we saw on TV. The face of Australian current affairs was sometimes serious, other times funny, but mostly likable due to his wonderful personable attributes.
Ray Martin, a graduate of Sydney University with a BA and History distinction, began his career as a cadet journalist with the ABC in 1965. He is also a high-profile personality in Australian media and television, a former television journalist, foreign correspondent, midday variety show host, and humble Aboriginal gentleman who is a descendant of the Gamilaroi people from New South Wales.

Martin is best know for his time on 60 Minutes, along with George Negus and Ian Leslie, and the variety show Midday with Ray, which were among the highest-rating programs on Australian television.

In October 2009 he released his autobiography titled Ray: Stories Of My Life - The Autobiography which talks about his life from his humble beginnings. Mark Graham, Aboriginal man from Larrakia Nation in the Northern Territory spoke with Martin about his Autobiography.

During Graham's interview, Martin revealed his passion for Indigenous Advancement, and spoke mainly about the disadvantages still in Indigenous education, and how he feels it's important for Indigenous parents to ensure their children are well educated.

Martin named Professor Fred Hollows, Mick Dodson, his brother Patrick Dodson, Galarrwuy Yunipingu, Lowitja O'Donoghue and Noel Pearson, as some of the most influential people he has met over the years.
Posted by ATSI GRAPEVINE at 9:36 PM