I posted a discussion 'Is Australia Racist' the other day on the Aboriginal and Torres Strait Islander Grapevine Discussion Board in Facebook. Around about 20 people commented, and I must say I was quite surprised with what people had to say.

The discussion was in response to a poll on the internet and the recent backlash in America and other countries after the performance of the Jackson Jive (click here to watch the video) on Channel 9's Hey Hey Its Saturday's Red Faces segment.
The skit was performed by the same group 20 years ago, but this time round the response was not great. I myself thought it was done in poor taste, and was thoughtless, and did not see any humour in the skit at all. During the performance, a card was also shown that had 'Where's Kamahl', who had previously been a regular guest on the show before it ended in 1999. Click on the image below to see Kamahl's response 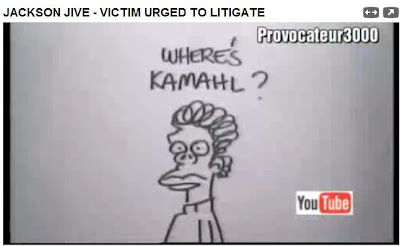 After reading the responses on the ATSI Grapevine, I was totally blown away by some of the responses.
Gary Wood said 'I honestly believe that people are just miseducated and ignorant. Yes, there are racists but alot of it is misguided cultural assumptions.'
Jub Clerc; 'i think the problem is is that Australians don't even know that they are racist. they live in this beautiful abundant country and are soooo spoilt by the wealth, prosperity and easiness of it that they have well and truly lost their heads up their bottoms.'
Helen Laub said 'I hear racist comments on a daily basis. Because I'm white, people don't think I will be offended. But I am. I know they wouldn't say these things if someone who wasn't white could hear them.'
Sabrina Seaman responded by saying this 'I think that people need to remember that what ever race you may be we are ALL human and deserve Respect. Australia would be a better country if we helped each other step up in the world not step on others.'
David Widders believed, 'education and awareness is the key to changeing attitudes and views. I run a days Cultural Awareness training where I want to change the attitudes and views of Aboriginal people.'
Jim Duffield spoke about the meaning of race and gave a very definitive explanation of the word. Duffield, also wrote that he was born in a Nazi concentration camp and was on one of 13 people in the world to survive, quoted confucius, writing 'The longest march begins with the first step.'

Others went on to say they believed Australia was racist but more ignorant of the cultural aspects of black people in this country, and hoped that educating people about culture could be a way to make people understand Indigenous people better.
The most comments were very enlightening and very positive about racism, saying they had experienced it but that if we all can work together we can find a solution.